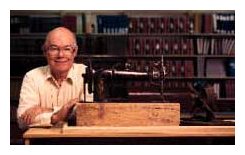 He was born in Tacoma, Washington, grew up in Tacoma and Seattle and graduated from Stadium High School in Tacoma. He was an Eagle Scout and is a 100% disabled Army Infantry veteran of World War II, where he received the Bronze Star, the Purple Heart and the Combat Infantry Badge.

Professor Blair has degrees in Chemistry, Physics and Law from the University of Washington in Seattle, Washington and an Honorary Doctor of Laws from Franklin Pierce Law Center in Concord, New Hampshire.

After working in the patent departments of Westinghouse Electric, Boeing, Kaiser Aluminum and Celanese Corporation, he was Vice President, Patents and Licensing, for Itek Corporation, Lexington, Mass. for 19 years.

After Itek was acquired by Litton Industries, Professor Blair was David Rines Professor of Intellectual Property Law and Industrial Innovation for 5 years at Franklin Pierce Law Center in Concord, New Hampshire. While at Franklin Pierce, he was also Director, Kenneth J. Germeshausen Center for the Law of Innovation and Entrepreneurship.

At Franklin Pierce he, together with Professor William Hennessey, established the unique Master of Intellectual Property Degree program, which educates people, especially those from developing countries, in United States law and practice in patents, trademarks, copyrights, licensing and technology transfer.

Professor Blair received a Award of Citation from the Franklin Pierce Law Center Class of 1989.

He has been on 6 US delegations to the United Nations in Geneva and New York and has been a consultant to the UN. He was also a member of the 1971 US/USSR Exchange on Patent Management and Patent Licensing, which made contacts leading to the negotiation of the period of "Detente" between the United States and the USSR.

He has been admitted to the practice of law in Washington State, Massachusetts, the US Supreme Court, the US Court of Appeals for the Federal Circuit and the US Patent and Trademark Office.

Preparation and issuance of patent applications. Amendment and full prosecution of patent applications. Patent interferences.
Reissue and re-examination of U.S. patents. Interviews and negotiations with patent examiners. Appeals to the U.S. patent Office Board of Appeals. Appeals to the U.S. Court of Customs and Patent Appeals. Preparation and issuance of trademark applications. Trademark oppositions.
Assisting and advising U.S. Patent and Trademark Office in international matters and negotiations.
Dealing with Other Corporate People:
Dealing with top corporate and division management on wide variety of business arrangements and policies relating to business and proprietary aspects of technology and trademarks, including innovation and technology transfer.
Explaining business and/or technical aspects of patents, trade secrets, trademarks, etc. to business and technical employees on all levels. Evaluating patent disclosures from employee inventors.
Working with employee inventors in getting patents on their inventions. Evaluating new products for possible infringement of patents owned by others.
Preparation of patent, trademark and technology clauses in varied types of agreements and contracts.
Evaluating preliminary prior art patent and technical literature searches and patent validity, infringement and state-of-the-art searches and trademark searches and reviewing them with management and non-management employees as required.
Technology Transfer:
Business and legal aspects of marketing and purchasing technology. Business and legal aspects of license negotiations.
License drafting. License administration.
Other:
Supervision of, and participation in, patent and trade secret litigation, in some cases representing the patent owner or trade secret owner, and in other cases representing the alleged patent infringer. Includes filing of administrative claims, and litigation in the U.S. court of Claims, against U.S. Government for infringement of patents.
Negotiation and administration of government contract patent and know-how matters.
Provision of detailed comments to assist foreign associates in obtaining appropriate foreign patent and trademark coverage.
Evaluating disclosures of technology submitted by outside inventors and companies.
Administering and analysis of payment of foreign patent taxes.

Member of five-man delegation in 1971 U.S./U.S.S.R. Exchange on Patent Management and Patent Licensing co-sponsored by the Licensing Executives Society and the U.S. Patent and Trademark Office. Les Nouvelles, 10/71
Private industry member on U.S. Government delegation to United Nations meetings in Geneva, Switzerland as follows:
1. United Nations Conference on Trade and Development (UNCTAD) on:
a. "The Role of the Patent System in the Transfer of Technology", September 1975.
b. "The Role of the Industrial Property System in the Transfer of Technology", September 1977.
2. Economic Commission for Europe (ECE), on "A Manual on Licensing Procedure", January 1979; and
3. World Intellectual Property Organization (WIPO) on "Establishment of a Guide on the Organization of Industrial Property Activities in Enterprises in Developing Countries", March 1981

Member of U.S. delegation on the "Law of the Sea", United Nations, New York, March-April 1982.

American Intellectual Property Law Association Member, Board of Directors, 1982-1985. PTC Research Foundation, Member of Advisory Council and member of Editorial Advisory Board of IDEA, The Journal of Law and Technology.

Recipient of Special Award "In Recognition of Outstanding Achievements in the Field of Intellectual Property Law".

(Click here for PDF for many of Homer Blair's Speeches)